You can discuss anything here, Jensen related or not. Technical discussions / questions may be moved to the correct Forum.
Post Reply
73 posts

So I must have OCDC, but for some ungodly reason I went through the "Jensen Interceptor, Gold Portfolio, 1966 - 1986" book and jotted down all the license numbers in the pictures...

I am now convinced the "EA" at the end of the letter portion of license number is something associated with handsome drivers (like Kenny, Grant and myself).

Anyway - the Jensen factory had a powerful marketing machine if they could register and loan out all these cars to magazine writers....

In order from the front:

It's crazy! Must be more than coincidence...

Hi Rocky,
The Poms will be able to confirm this when it becomes daytime over there, but my understanding is that (in the old days at least) the letters signified the geographic location of issuing the plate - so I'm assuming it means West Bromwich?
Still, fantastically diligent research by you, and a credit to your and the other fellows' handsomeness.
Simon.
Simon
1974 Interceptor III
1973 Lotus Europa Special
1979 Rover 3500
Top

Gollee Gee Rocky! I have come over all flustered and flushed. Not certain about Grant though. I am still optomistic, do you want a ginger pussy. Am ready to send postage paid. Pres. Trump speaks highly of you and your Republican activities Kenny38

Yes Simon, the letters indicated a geographical area.
Codes were allocated alphabetically from A through Z based on population size. A was allocated to London, B to Lancashire, C to Yorkshire West Riding and so on. The letter I was not used as it could be confused with the number 1. The letter Z was allocated to Dublin (in those days Ireland was ruled by the UK).
When they got to Z, they continued with AA, AB, AC, AD and so on until all the areas had an initial allocation. FP was the last code initially issued. EA was allocated to West Bromwich as part of this first round of allocations.

Registration plates were then allocated by the local authority using their allocated code plus 1 to 4 numbers. The first 9,999 vehicles registered in London would have been A1 through A9999. When that was used the area went to another 2 letter code but there was no system to the allocation of subsequent codes which went on a first come first served basis. GS for example was allocated to Perthshire, GT and GU were allocated to London, GV to Suffolk.

EA was allocated to West Bromwich and registrations in this series were issued between 1904 and 1938.

In the UK registrations are never recycled after a vehicle is scrapped. There was no system put in place to put a registration back in the system, once issued the number stayed with the car regardless of where the owner lived and once an owner moved out of the area where a registration was issued the local authority would lose track of it. So, by 1932 the available numbers for 1 and 2 letter codes were running out and so the system changed from 1 or 2 letters plus up to 4 numbers to 3 letters and 3 numbers. The local authority could add a letter in front of their allocated area code. Using again EA as an example, in December 1938 West Bromwich started issued AEA registrations with 1 to 3 numbers following, in November 1939 they started the BEA series, CEA came in June 1946 and so on.

By the mid to late 1950s some areas were again running out of numbers so a new system was introduced by reversing the sequence and having the numbers preceding the letters, still using the allocated area codes. On the first page of this thread is the Norcros 541S, registration 579 FEA. This is a reversed style issued by West Bromwich from July 1961. The regular letters/numbers style had been used from January 1950. Sometime in the first 3 months of 1950 registration FEA 579 was issued. Just over a decade later 579 FEA was issued.

In 1962 the system changed again, registrations reverted to the letters followed by 1 to 3 numbers format and a year suffix letter was added. A = 1963, B =1964 and so on. Not all areas used the suffix system until 1965 when it was made compulsory. Initially the year suffix ran from January to December but the car industry lobbied for a change so in 1967 the E suffix only ran from January until July, the new F suffix started on 1st August 1967.

Clear as mud? I hope so.

The first ever EA registered Jensen

To respond to Rohan's point about C-V8 HEA 5D not being on my list, it seems I just missed it, the car survives with former JOC Chairman Alan Smith.

I am raising them for sale, and have gotten several offers on the whole lot. Please send directly. Thanks, and I will give "The Donald" your regards - expect his phone call soon!

RockyUSA wrote:Anyway - the Jensen factory had a powerful marketing machine if they could register and loan out all these cars to magazine writers....

In order from the front:

Does anyone know if YBP 5G is still about? I have the original instruction manual that came with the car. 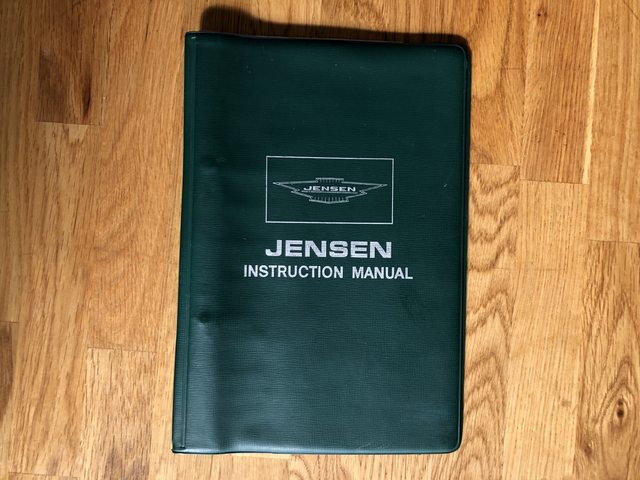 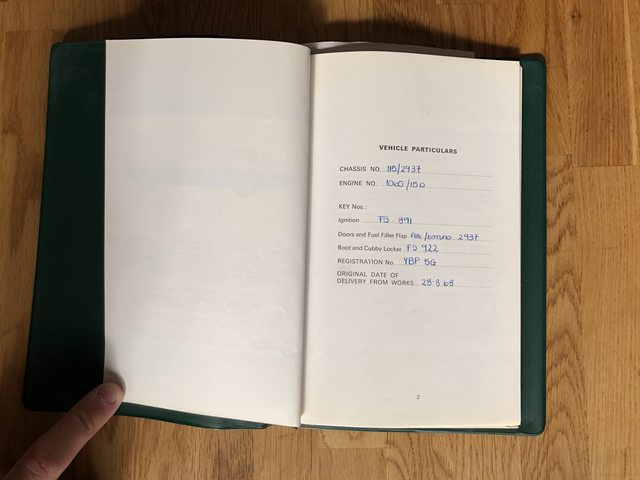 701 KEA is JM/EXP/107, the car survives in Devon with the daughter of the man who bought it in 1970 from the first owner. There are photos on the Forum.

Isn't it called Gengis? or is that another 1?

Hello guys
Yes it is Grant definitely...
SRS2000 owns that car Lawrence
Perhaps he will be along soon
GaryC
Top
Post Reply
73 posts